You have no items in your shopping bag.

Product was successfully added to your shopping cart.

Moroccan Oil. What's It All About?

Moroccan Oil has become ever more popular since its "migration" from the Middle East, but there has been some controversy as far as its effectiveness when it comes to colder climates. However, after some testing, it's been shown to help with hair damage caused by the cold, which causes the hair to become brittle, dry and tangled. It's absorbed quickly by the hair and starts working almost immediately. Furthermore, since it's a natural oil, it does not freeze in colder temperatures when applied to the hair. Moroccanoil® is sold exclusively by salon professionals and authorised retailers.

Arrival of Moroccanoil® on the global market has forever changed the hair-care industry. Moroccan oils have been produced for many centuries, but availability to international clients has come about only recently. Initially, its composition and ingredients were kept secret, and were passed from one generation to another. Back then, the distribution of Moroccan oils was kept local, and very small quantities were left for export. Luckily, today Moroccanoil® is a multinational trademark, which supplies the four corners of the globe with the oils "magic".

It should be applied prior to heat styling (blow drying and straightening iron use for example) and as a finishing touch to any hair-do. It softens the hair and helps protect it against heat- induced damage. 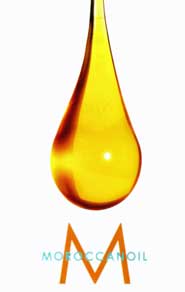 Thin, brittle and damaged hair benefits immensely from Moroccanoil® products, when applied as a leave-in conditioner. It acts as a protective shield from the heat and chemical exposure.

Genuine Moroccanoil® is known for its heavenly, tropical scent, it is another reason for its popularity. MoroccanoilÂ® can only be purchased from salon professionals and authorised retailers.. Distribution of Moroccan oil is limited, because it is a product of superior quality, acquired by specialists for a discerning clientele. If you purchase Moroccanoil® products from an unauthorised dealer, you are buying diverted and/or counterfeited products that are not protected by the Moroccanoil® warranty. Authorised retailers are not permitted to sell Moroccanoil® products via Amazon or eBay so if you see these products on these websites they are being sold by unauthorised dealers.

Moroccanoil® is also used as a skin moisturizer. It hydrates and smoothes the skin surface instantly. The virtue of this product is its absorbency speed. Whether applied on hair or skin, it absorbs immediately. Moroccanoil® does not contain alcohol and will not irritate your skin. Moroccan oil is cruelty free (not tested on animals) and not derived from animal cells.

Moroccanoil® is available to purchase from authorised retailer The Salon Look